Dr. Solomons and VPF Director Joanne Yount
in the Cleveland airport, returning
from the VPF Ohio Seminar, May 2000.

The Vulvar Pain Foundation has held 30 Seminars since December of 1992 throughout the United States and one in Canada. Beginning with the 10th Seminar in late 1995, the VPF has included the statement, “I have significantly improved on the following treatment (describe briefly),” on Seminar registration forms followed by space for writing a response.

For several years, the VPF simply collected the comments. In preparing for Seminars, the information helped the speakers know in advance at least some of the characteristics of their audience.

The information also helped me personally in preparing for networking and support activities during each Seminar. It gave me a general idea how many recovered women would be attending, and how they had recovered. That way, I was better able to enlist their help to inform and encourage the others.

At the VPF Maryland Seminar in October 1998, the Foundation began publishing statistics from the registration forms and distributing them to the attendees. The information was compiled at the close of registration, a few days before the Seminar, so that the women could see comprehensively how the significantly improved members in their group had recovered to date.

This way of gathering information is not a scientific survey. It’s more of an informal poll. Most surveys have multiple choice responses and uniform, quantifiable answers.

For example, a rheumatoid arthritis survey might state, “Using cortisone injections, I have responded as follows: (a) I am worse. (b) I am the same. (c) I am slightly better. (d) I am significantly better. (e) I am completely better.” 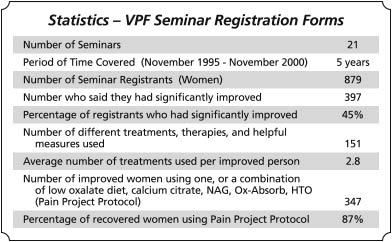 On the VPF Seminar registration form, the Foundation asked what survey research designers call an “open-ended” question. That means the person taking the survey can say anything she wants, in her own words, without any prompting.

While this informal way of gathering information is useful, exactitude and specificity are sometimes lacking. For example, occasionally a registrant would write, “supplements.” (Which supplements?!)

Sometimes a registrant would wax rapturous about how she could at long last wear jeans, have intercourse, sit at her desk for hours . . . and then forget to report the treatment(s) that had made that possible!

Lots of women (229, to be exact) reported that they had been taking calcium citrate, a component of the Pain Project protocol. A few women added the word “timed” when they listed it, which is a big clue they are in the research Project. However, the absence of this word does not indicate they are not in The Pain Project. A scientifically designed survey would elicit this information and reveal whether timing had made a statistically significant difference.

The vast majority of Seminar attendees were also using several treatments and self-care measures simultaneously to alleviate symptoms and discomforts. The average number of treatments being used per significantly improved person was 2.8. Some registrants listed only one successful treatment while others listed five. In this circumstance it is difficult, if not impossible to know with certainty which one or more (or all) of the treatments were doing the job.

Also, some of the women who were significantly improved did not fill in the blanks. In certain instances, when I or the Seminar Coordinator personally knew the registrant well, we added her information by checking with her first. However, the registrants we already knew well (and had time to contact) were a small percentage of the total number. 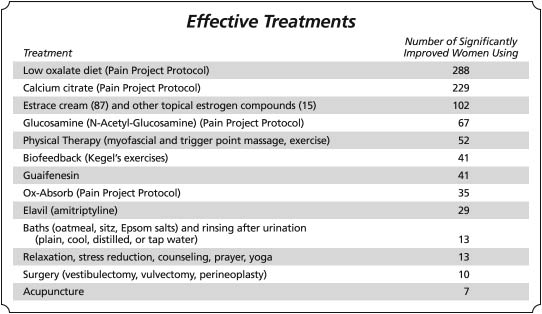 Some registrants filled in the blanks and gave us a lot of information about the treatments they had tried even though they said they had not improved, or only slightly. Although the information was helpful in planning the Seminar and getting to know them, it was not counted in the recovery statistics.

They also reported treatments within the conventional medical model, such as Estrace, guaifenesin, antifungals, and surgery. Conventional pain management therapies, which help alleviate symptoms in some women but do not affect the underlying disease, were reported by some registrants. They included antidepressants such as Elavil, and antihistamines such as Atarax. Alternative methods of pain management such as acupuncture were also reported.

Natural measures, including sitz baths, oatmeal baths, and rinsing after urination, were listed as contributing significantly to recovery, along with exercise, prayer, yoga, relaxation, and stress reduction. My “take” on these responses, from actually talking with women at Seminars, is that more of these were being used than were reported in writing on the forms. Although these measures are not generally considered medical treatments, women often discover that they are quite soothing.

Clearly, the top treatments were therapies in The Pain Project protocol. Reported by 347 significantly improved women, these included the low oxalate diet, calcium citrate, N-Acetyl Glucosamine (NAG), Ox-Absorb, HTO (hexadecyl tetradecenoyl octadecanoate), and the many tips and measures that go along with this protocol, such as avoiding tomato products and coffee, reduced vitamin C supplementation, increased intake of water, and more. 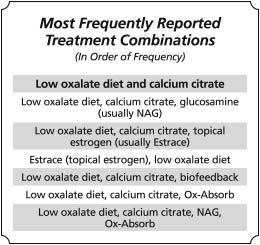 Of the 397 significantly improved women who attended these VPF Seminars, 87% were using one or more of the connective tissue stabilization therapies pioneered by The Pain Project research.

Use of Estrace cream and other topical estrogen products (which also stabilize connective tissue) were reported by 102 significantly improved women. The other products included estradiol or estriol compounded in vitamin E oil, Premarin cream, and other unspecified “estrogen” creams.

Each of these successful therapies were frequently used in combinations. At all VPF Seminars recovered women have also emphasized that patience, perseverance, and stick-to-itiveness with treatment are vital factors in recovery. One registrant even listed “support group meetings” with the treatments responsible for her recovery.

I encourage each of you who has not yet recovered, or fully recovered to take advantage of the opportunities you have to obtain information and encouragement from recovered women. You can do this by communicating with your Leaders by telephone, postal mail, e-mail, home fax, and in person, and by attending VPF support group meetings and regional Seminars.

The redeemed lives of recovered women bear testimony that these treatments work. On behalf of the Foundation, I thank all of you who have recovered and stayed involved as active members, Seminar attendees, Leaders, and Seminar coordinators. Your example, kindness, and encouraging words have often been the reason another vulvar pain sufferer decided to “go” for her own recovery, and made it.